Because, although we shouldn’t, we all do judge a book by its cover… so I decided to do a “Top Ten” of the best Pride and Prejudice book covers I could find.  Some of them (including the favourite) I have seen in book stores, whereas others I have only had the pleasure on the internet.   Choosing the perfect cover is a bit of an important exercise for your favourite book, and it can change the entire way you perceive a novel.  Myself- I have at least four copies, I’d say.  One is the boring orange-and-white penguin book, that was only about $10 and therefore I justified another copy.  One is in a collection of Austen novels, which has lovely pages, whereas one is a red leather-looking cover with gold inlay.  The other two are classic regency painting-style covers that I’m not particularly keen on.  What book cover does yours has?  Do any have a special significance to you?  I’ve tried to keep this in order of preference, but failed dramatically.  I did, however, try to include a range of different styles as they all have merits!

10. Standing proud at number ten, I’ve chosen the 1961 cover of Pride and Prejudice to start the list.  It’s a bit plain, but it is a nice quirky piece from Signet Classic CD and from what I have read it is the 82nd cover out from them.  I think some of the symbolism is quite interesting, particularly the lock.  Why do you think they put that on the cover?  Perhaps it refers to secrecy, or even being proper and having your emotions and feels locked up or maybe it refers to being locked in to positions within society.  It’s up for debate.

9. Vintage Austen cover.  I really love the patterns on this range, particularly on the Emma cover, but this one is just really simplistic and beautiful in that way.  It obviously shows Jane and Lizzy, and I think it’s a great choice as it expresses the sisterhood that is the heart of the book.  I adore the contrast, but still similar nature, of the two girls- it suggests that they are kindred spirits but also so different in personality and disposition.   I also think the patterns (that remind me a bit of wallpaper) feel as though they fit the time period very well.

8. Cross-stitched cover by Leigh-Anne Mullock (and there is also one for Mansfield Park).  I thought this was a fantastic idea.  It discusses both accomplishments, and the romantic side of life through just one graphic.  It also makes me think about the rigidity, and boredom, that characterised society at the time.  What do you think?  Oh, and the cross-stitched top hat is just gorgeous!  I think the colours are a tiny bit boring thoug, but it does well to represent the time (and it also reminds me of the BBC Pride and Prejudice opening with the classic music and the stitched material).

7. I consider this to be a fairly modern representation of the book.  I like it because it has that ‘English Rose’ idea, but also indicates themes of contrast and duality.  On the flipside it’s a bit too twilight-ish for me (and it was actually designed as part of a ‘Bella’s favourite books’ series), and the white-red idea doesn’t really fit with the book itself.  Roses are a symbol for love and passion though, which is definitely nice.  I also have to dislike the tagline “The love that started it all”… that started what exactly?  It doesn’t really explain very much.  The picture itself is very pleasant though, and there are two others out there in the same set with rose-themes that are used to fit the picture (for instance, a closed rose for Wuthering Heights).  It is nice to see one way of using a trashy pop-culture book to get people into real literature!

6. I absolutely adore this ultra modern take on it.  It does sort of look like a chick flick, with a demure Lizzy, but having real people on the cover does absolute wonders.  If I was a younger teen I would definitely want to pick this up, and I think the beauty of a cover is being able to do that.  Unfortunately, I think the content becomes a bit mills-and-boon when put into this context, but it’s definitely a way to sell it.  I also love the clothes, the fact it matches the actual age groups at the time and the girl, although looking a bit meeker than the actual Lizzy in the words, seems to have a bit of a smirk about her which I like!  What do you think about this saucifying up of classic literature?  (Side note: apparently this is the ‘Insight’ cover for Pride and Prejudice and contains little trivia-style facts, including a bit of information about the 2005 film and so on).

5. I love this simple, whimsical cover.  I would definitely buy this.  It reminds me of fairytales and storybooks, while also touching on romance and the 18th/19th Century.  The swirly, almost vapour-like wording is beautiful, and I think that having the characters facing opposite each other is fantastic- body language expresses a lot.  I also think the little touches of nature are the perfect representation of Lizzy and Darcy, as they are both natural beings at heart.  The subtitle “A Classic Romance” to me feels like an over-simplification of what the book is.  At its heart… is it really a book just about romance?  Or is it about a family?  Or social commentary…?  Or what…

4. This peacock cover is absolutely stunning.  The peacock idea was repeated on an absolute tonne of covers I’ve seen, but this is amazingly well done.  The picture actually reminds me of an Edward Gorey illustration (which you should totally Google if you are into black-and-white retro looking graphics with quirky subject matters and wording).  The idea of a peacock itself is very well chosen, as it represents not only the upper-classes (and the displays of wealth, marriagability and so on that are repetitive in the book) but it also suggests the over-flattering character of Mr. Collins, the flamboyant behaviour of Mr. Wickham and the loud attention-seeking traits in Mrs. Bennet.  I would go so far to say that peacocks also sort of indicate pride, which is obviously a factor in the book.  This copy itself actually has some fantastic illustrations (which I’ve seen on the internet, and are beautiful) and it has very detailed images over the lettering as well.

Apparently, Hugh Thomson, the illustrator, was born in 1860, and lived until 1920, but by 1900 was a very popular illustrator.  This is supposedly the ‘1894’ peacock edition, of which you can by a fan-art bag from the Jane Austen giftshop (UK).  It’s certainly on my wish list, and apparently the colours on the bag seen are those the cover actually is!  From a quick search, a dodgy worn copy (as well as childrens drawing all over the inside illustrations, loose pages and cellotape holding it together) costs about 300 dollars.  If you know a better estimate then tell me!  According to B. C. Southam, in Jane Austen the critical Heritage 1870-1940 the new copies were received well, but some asked why they bothered with the illustrations, saying “Jane Austen’s art cannot be aided”.

3. A penguin classic, this also has a bird motif.  I would never sit down and read a hardback, to be honest, but it is definitely a beautiful one for the shelf (and comes in an absolutely lovely collection that I highly suggest getting).  This set is designed by Coralie Bickford-Smith who designed all of them in the hardback classics series to have “patterns that adhere to a strict grid”.   She also won the ‘best brand or series identity’ at the ‘British book design and production awards’ and this definitely isn’t her first lot, with plenty of others out (including the Arabian nights).  I just think this set is absolutely perfect for my bookshelf.

2. Edited by Fiona Stafford, this (2008 re-issue of the similar 2004 cover) Oxford World’s classic is just elegant, although apparently the supplementary material inside isn’t that great.  I know it’s a bit cliche, and I generally tend to dislike the classical-looking covers, but this just seems really personal (it’s actually of Mrs Edward John Littleton by Sir Thomas Lawrence 1822).  And it isn’t the most typical cover in the world.  To me, the colours in it are perfect, and the girl isn’t typically beautiful like most of the ones you see in the covers, or handsome or whatever.  And despite the weird hair (which actually is just like Jennifer Ehle’s in the BBC version) and clothing, she would fit in perfectly in the real world.  It’s just a breath of fresh air to look at. 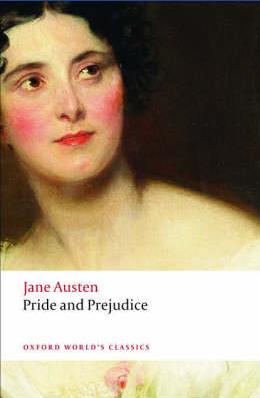 1. And last, but not least, my favourite.  It is also a Penguin book, but it’s such a different style.  It reminds me of a gothic Tim Buron-esque picture (thinking: The Nightmare before Christmas film).  However it also touches on things like silhouettes (which definitely remind me of the era).  The book itself, from rifling through it, has lovely pages that just make you want to read, which isn’t surprising as it’s meant to be a ‘Deluxe Edition’.  It’s drawn by the fashion illustrator Ruben Toledo, whose work has also been in Vogue, The New York Times and Harper’s Bazaar (and who also did the similar-looking, but different styled, covers for Wuthering Heights and The Scarlet Letter).

So now you have seen my top ten!  What are yours?  Do you agree or disagree?  And if you can’t find a cover you like then read on…

There is this fantastic idea from Penguin to ‘make your own’ book cover, with the tagline ‘Books by the Greats, Covers by You’.  I’m hoping they will bring out Pride and Prejudice in this series (so far it is a slightly random collection- Emma, Dracula, Alice in Wonderland etc) as I would love to decorate my own.  What would you put on yours?  For some suggestions, check out the gallery of the books already decorated I think this is a great way to encourage people in to the classics and to make them think about the content!  So, lets hope P&P makes its mark in this collection soon, and I hate to jump the gun but I think it just might.  On the Penguin blog it says: “…if the first six work we’ll publish more” so go and support them by picking up a copy of Emma!