Visiting Newtown, one of my regular book hunting spots, and having already bought secondhand copies of Victorian Entertaining by John Crosby Freeman, Women and Marriage in Victorian Fiction by Jenni Calder and Jane and the Stillroom Maid by Stephanie Barron (at Gould’s Book Arcade further up King Street), I was thrilled to walk down the road and find Dinner with Mr Darcy at Art on King/Modern Times. It was in plastic, for $39.95. It was marked on the back for £16.99 or (US)$24.95 with Canadian prices higher.

I already have one Jane Austen Cookbook (from which I made negus), however this made me keen to get my hands on another one. One of my not-so-well-known passions is cooking, so combining Austen with food is a thrill. ISBN: 978-1782490562 I would have completely missed this book had it not been pulled out and placed with the cover facing off the shelf – I actually put a different book back to get it.

It was published in November 2013 by Cico. It has a negative review on Amazon someone was unhappy they couldn’t see inside with the plastic, and complained about the metric measuring system. I can’t see either of these things as huge problems to tell the truth! They also said that the recipes wouldn’t suit a modern audience… I disagree completely.

Peeling off the plastic, the pink cover is a matte fabric-style on hardback, which isn’t actually great for keeping clean when you’re cooking. The pictures and pages are also matte, but still fantastic quality. The introduction explains that the book includes recipes of dishes mentioned in the books and correspondence from Austen, as well as some artistic license around what it is likely that the characters ate. It also has information on different place settings and customs in each chapter, similar to the book I’d previously reviewed. It also has some snippets of the original recipes (of course, the ones we follow are substantially updated).  There are a number of dishes similar to those in my other cookbook (syllabub, negus, etc), but plenty of originals too.

Each chapter is given a theme or title of a book or letter – Pride and Prejudice gets two chapters (Mrs Bennet’s Dinner to Impress and the Ball at Netherfield). I love all the cursive details and decorative features around the book, which make it really nice to just browse through.

I also absolutely love the gorgeous photographs of each dish, which seem really well thought out and not over done. I turned the pages in the car on the way home becoming increasingly excited about a number of potential things to cook – from bath buns and crumpets to herb pies, gingerbread and caudle. I really like that the balance between savoury and sweet is quite strong, as many Victorian/Regency cookbooks lean towards cakes and sweets, which ignores the very exciting savoury dishes they had.

However, one dish stuck out to me (and we felt like something sweet): lemon cheesecakes on page 76. The tempting cakes are in the picture below… who wouldn’t want to eat that?! 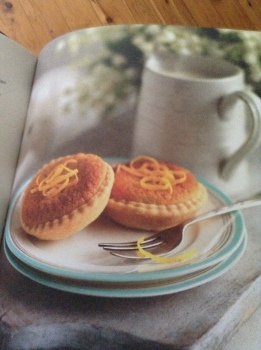 Being vegan, and gluten free at the moment, making this dish was going to leave me with my work cut-out, but I decided to give it a go anyway. The recipe calls for shortcrust pastry, butter, superfine caster sugar, two lemons, two whole eggs, two tablespoons of orange flower water, a tablespoon of cream and a cup of ground almonds. Not all of this was easy to replace. I ended up with gluten free puff pastry (not ideal), nuttelex margarine, lemons, raw brown sugar, egg replacer, orange essence, rice whip vegan cream replacer, almond meal – I guessed this would work just as well – and a vegan cream cheese for some texture (Tofutti’s Better than Cream Cheese).

By this point, having put the oven on, I tried to follow the instructions (cream butter and sugar together etc) before giving in and doing my own thing – basically mixing everything up in a bowl together, pre-cooking the pastry and then combining. I’ll admit that I also couldn’t find weighing scales and so everything was a complete guesstimation (I then changed my mind and decided to do six rather than 12 midway through). I had some left over filling – which is in the freezer to see if it tastes good as icecream (the benefits of not cooking with eggs is that you can eat everything raw!).

I kept them in the oven for something like 15 minutes (maybe a little less) and I’d previously baked the pastry for about 5 minutes (before then trying to deflate the “puff” bit of the pastry). They could have done with a little longer, but I was very scared of burning them – I rarely bake or cook sweets, with stews, curries and sushi being my usual meals to make, so this was way out of my comfort zone. Next time I won’t be so precious about it!

They worked out ridiculously well, with rave reviews from my partner and housemate – light, sweet, but not overly sweet, and with a crunchy outside, they perfectly fitted the description in the book that noted they taste closer to egg custard tarts. They were also small enough to be dainty, and to be eaten with the “carpet picnic” we had prepared for dinner – part of the reason I went to the Emma ‘The Picnic Parade’ chapter to find something to make. 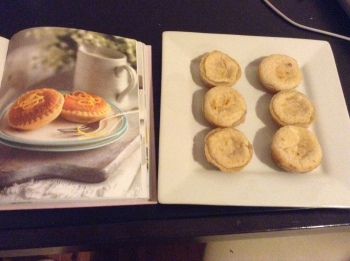 My image of the ones I made shows that they look a little anemic – due to the colour usually provided by the eggs. However, they were still full of flavour. I recommend a bit of orange food colouring for anyone else trying GF/vegan or putting more of the rind on the top as this goes crunchy and golden in colour – I only put a tiny bit on mine. The actual instructions in the book were very clear, but unfortunately with my requirements I always need to deviate and I tend to make recipes up anyway using what I’m given.

I also found that, unlikely most cakes where if you’re greedy and over-fill the section they overflow and are your worst ones, these are better when you’re generous with filling the pastry cake. While they do rise slightly, they retain the majority of the shape you put in (I think perhaps due to the almond meal?).

Hey, they’re not that terrible if you ask me!

Even if you’re not a great chef, or just like to cook, it’s likely you’ll find something to put together. Or you can just stare at the gorgeous pictures and little interludes explaining dining customs. I’m in love with it – it’s especially perfect as I’m hoping to organize a high tea for my sister’s hen’s night/day, so I’m sure there will be some inspiration in here.

The book also has the benefit of feeling (and no doubt being) very well researched. Vogler mentions different chefs and cooks of the era, and speaks of Mrs Bennet’s guess that Darcy has “three or four French cooks”, to help predict the closest dishes on Jane’s list, as well as using the mentions in the novels (we are told the Bennets were perfectly able to keep a good cook) and her letters (including a reference to icecream).

Vogler works at Penguin Books as the editor of the Great Food Series (anyone else jealous of her job?) and has a really interesting blog. This post discusses how a real Dinner with Mr Darcy was put on for her. “The food was inspired by my favourite Jane Austen dinner of all, the one at the end of Pride and Prejudice where Mrs Bennet is determined to impress her guests of honour, Bingley and Darcy,” she says of the event.

Next time I want to make a savoury soup, the herb pie or the maramalade. I also like the sound of the orange wine and the India pickle. It fascinates me, with Regency food, how some of it can look amazingly appetizing while much of it can look just as horrific!

Would you try any of these dishes?

Also, for the interested, here are those other books:

As noted at the top, these are from a secondhand book shop (Gould’s Book Arcade). It was a pretty hot day, and they don’t have much airconditioning, so you can imagine how dusty and crazy it was inside. It’s on two main levels, with piles and stacks of books on almost every topic imaginable as well as CDs and magazines. I highly recommend a visit to any book lovers in Sydney.

Filed under Book Review, Other Review