There’s a brand new iPad and iPhone app game out today (to coincide with Jane Austen’s birthday), that I’m pretty much convinced all Pride and Prejudice fans will adore. It’s called Regency Love by Tea for Three Studios. I downloaded it on Saturday using a promo code for a preview, and have already got my first Regency lady to the end of the game (marriage, and 100 points for all of the accomplishments).

It’s a role-playing, interactive game that I think is sort of like the slightly less intense version of the Kickstarter MMORPG Ever, Jane. I’m also really proud that the group who created it are Australia-based! (Makes this Aussie blogger very very happy). They’re originally from Sydney, and gave a preview in June at the Pride and Prejudice Conference at Lucy Cavendish College, Cambridge.

With the original story and game design by Samantha Lin (who got in contact with me), Jenny Tan and Melody Wang, it’s well designed, with beautiful character creations, and it works pretty smoothly. I’m looking forward to presenting a Q&A with Samantha on this blog soon about how the team created the game, and the considerations behind it – so keep an eye out!

It’s a game centering around dialogue – the things you choose to say to others (which can be very subtly nuanced) will have a significant impact on how you will fare. Often, it’s the difference of who you introduce first, or whether you look down, or do you smile and nod, or just nod. I love this! Be prepared for balls, trips to buy fabrics and dresses, tea parties, unexpected visitors, horse riding, letters and, yes, more balls.

You can also play carefully to end up with the husband of your choosing (I set my sights on Mr Ashcroft earlier on, as he reminded me of Mr Darcy – dark and brooding). You start off by naming your character. There are pre-selected names that you can keep, all in Regency style, or you can choose another. I, of course, put in ‘Elizabeth Bennet’ on my iPad mini, and entered into the game. It has some very simple controls, swiping to choose dialogue and some skip functions. I’ve screen shotted below to give you a feel of what you look at in the game (it’s in landscape on the iPad).

To gain points to use for accomplishments you have to undertake different ‘scenes’, as well as hangman games (where you guess the missing word – often from a Pride and Prejudice sentence) and quizzes about Regency-era customs (such as how long do you wear mourning clothes for a sibling).

Unfortunately, it seems that if you exit out of a scene mid-way and go to another app, it sometimes stuffs up a bit and doesn’t allow you to finish a scene. I’m not sure if this was just a problem on my iPad.

The music score is gorgeous (from Jeremy Sawruk), and I particularly liked the stern, dangerous music that suddenly played when a less than pleasant scene happened with Mr Ashcroft. My heart actually raced a little bit – so I definitely recommend playing this one with the music on! I’ll admit I got a little sucked in to making it perfect with Elizabeth the first time round so when this happened I was freaked out I’d ruined her happy ending. It all got back on track though.

Some strange, but fun, additions included the local children and the Lord Fat Cat (actual cat – see below).

I was lucky to choose very wisely the first time round and have good qualities such as being Amiable and sensible. When I played the second time round, I actively chose ludicrous responses and was gratified to see ‘Vulgar’ and ‘Frivolous’ pop up into my list of qualities.

There’s a great map of all the different places you can choose to go – Home, Dunnistone Manor, Woods, Town, Parks, Lampton Hall, Castoridge Court and Thornleigh (Mr Ashcroft’s home!). I still have a number of characters yet to meet in my next attempts, as you can see in the picture above, and I’m looking forward to ‘collecting’ them so-to-speak. I also like that you get to collect the epilogues of your characters. 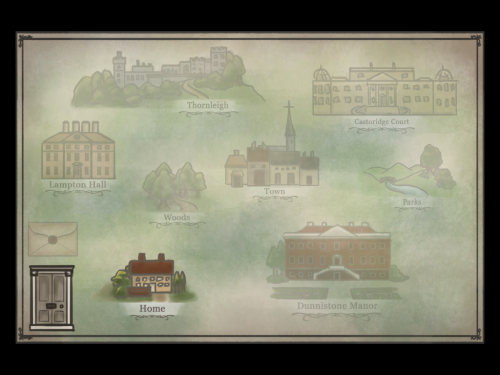 Each potential location lights up when you’ve opened up new quest-style moments, or have enough points. I really like the watercolour/chalky pastel style of the images as I think it really gives it that Regency feel – plus it ties into the idea of accomplishments and the country village.

I’m actually head-over-heels for this app. It combines my love of video games, Jane Austen and my iPad, in a pretty much ‘dream come true’ fashion. I also get the feeling that the team behind it is incredibly passionate (read the excitement that pours through from their blog), which makes me excited too. Pricing is US$2.99 until 15 Jan, after which time it will be US$4.99. You can purchase it here on the iTunes store.

If you want to get in touch with the team, you can tweet them via @TeaforThreeTime, or via Tumblr and Facebook for both the company and the game. We’ll be having a Q&A with Samantha Lin from Tea for Three Studios soon. What would you like to know?

Filed under Other Review, Preview