As many of you know, I am picky when it comes to books and their covers.  If a book is ugly, I will generally refuse to buy it.  I’ve previously presented my “Top Ten Pride and Prejudice book covers” as well as the “Top Ten Foreign Pride and Prejudice Book Covers” however I was looking through the Borders website the other day, and I found some new ones (I almost squealed the house down).  And yes, I went through all 874 results for this!  I have endeavoured not to include eBooks when it is clear (but sometimes they are listed wrongly) and I have not included books from the previous lists, at least not to my knowledge.

10.)  This pink and purple cover is girly enough to make me grin, but not too sugar-plum-fairy.  I like the little understated illustration, and I think it would be perfect for a first copy for a 14 year old or similar age.  It’s a US Penguin Edition from the Penguin Classics Deluxe Edition series.  Ahh, Penguin, how much do I love thee…

9.) By no means the type of cover I normally look for, but the illustration in this is gorgeous.  I just wish it wasn’t surrounded by the most dreadful yellow colour.  This is another general Penguin version.  The scene it shows just reminds me so much of the characters that I couldn’t bear not to include it.  Unfortunately, there’s something a bit school-book about this version that I don’t like.

8.) This abstract cover is quite lovely.  I’m not convinced it fits the book, but it can’t be looked over for artistry.  Published by Pearson Education Limited, it also has black and white line drawings inside.  I like the vibrant but watercolour style, and I get a Greek Mythology feel from it that is never displeasant.  Having the representations of other characters around Lizzy is also quite interesting- it is rare to see Wickham on the front cover, who is the character to the left of the book cover I think, almost struggling with another person.

7.) This sophisticated cover still manages to be somehow feminine.  While it seems to be an iStock image or similar, it suggests tranquility, and all the colours suit well.  I also think that an older reader or perhaps a more serious person might suit this style.  I get a Mr-Bennet’s-study feel from it, and I can really imagine a stack of books like that in the Bennet household- a nice blend between domestic practicality and education.  Perhaps it also counts as a symbol for Elizabeth, having the fresh pear suggesting her vivacity, and the hefty looking books talking about her enjoyment of reading and her quick mind.

6.) Vibrant, different and yet still has an era feel- I love this cover.  While the protagonist looks a little deceased, the dress is so beautiful!  I can’t quite make out the comment, but I’m fairly sure it says “Iconic characters you can’t live without…”  The way “JANE AUSTEN” looks like it has been stamped onto the cover is pretty cool as well. This cover is available in both eBook and Paperback editions, and is a Penguin (yet again!) from the UK.  I like anything with that lace-edge to it, as we see around the title box and the top right hand corner, but the lack of expression to me suggests that this is no Elizabeth Bennet.  Again, it would most likely be a nice gift for a younger reader suited to chick flicks and teenage slush.

5.) A little bit Penguin Vintage Classics (but not), it has a slight oriental feel to it.  Indo European publishing are the source of this copy (interestingly enough, mainly a digital company) and I think it has done a fairly good job at choosing the colours and shapes.  The costuming is interesting, but I like the abstract collage-effect that the different colours give.  Of course, the fact that the character is reading a book on the front cover also helps me to like it!

(In case you don’t remember, this was the Vintage Classics cover that I loved so much originally, and now have a copy of!)

4.) I harbour an intense adoration for Vintage.  Whenever I pop into second hand book stores (most of which are in Newtown), I am always drawn to those old-school horrors and mills and boon novels, with damsels in distress on the front.  The content could be, and frequently is, dreadful, but who can pass up a cover like the one below?  I think the caption says “Mum’s fishing for husbands- But the girls are hustling (?) for love…”.  The costuming might be a little questionable, but with colours that saturated and font that old-school-Hollywood, I’m beyond caring.  Possibly for the same reason that a little part of me will always love the 1940s Olivier and Garson Pride and Prej!  I’ve added a second picture from the Borders website as well, that I think isn’t as great but has similar characteristics.  I also far prefer the costumes!

3.) This marriage-centred girly cover makes me feel all squishy.  While VERY heavily reminiscent of a Penny Vincenzi cover (see below) who writes romantic-style stories of a more Mills & Boon variety than the classic Regency, it doesn’t bother me.  The furniture is really quaint, and the gloves are a perfect touch.  While still being a little over-girly, it is easy to appreciate and would look nice on any bookshelf.  Made by Createspace, which is actually a virtual publishing company (so I’m not sure if this is a paperback or not), I think it’s pretty win! 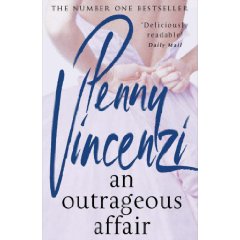 2.) This slightly wacky cover reminds me of the film Corpse Bride (the animated stop-motion epic from Tim Burton) and also a little of Helena Bonham-Carter.  The exaggerated silhouette is quite effective, although I’m not convinced that was the style of the Regency era (can anyone clarify this?).  The beautiful background colours, and the deepness of the cover also make it seem like a mystery novel.  It’s just lovely, even if I think that is more a Lady Catherine than a Miss Elizabeth!

1.) This is adorable.  While it looks a bit like a mystery cover, I completely love the egg-timer shape, and the carriage (which I believe is a Barouche but I may be mistaken).  Published by The Art Cannot Be Damaged, with a foreword from Mike Tyler, it’s beautiful and very different- with some sort of symbollic undertones.  I also love the way the letters swirl behind the title.  I wouldn’t recommend downloading this one though in the eVersion, as it seems to have had poor reviews regarding errors in the text, but perhaps the Paperback version is different?

It looks very much like the cover of a book I read when I was younger called Minders by Diana Hendry (I can’t really remember much except it was about wizards or something, and I used to really love it when I was in primary school).  It took me a while, but here’s the cover:

Filed under A good find, Discussion, Other Review