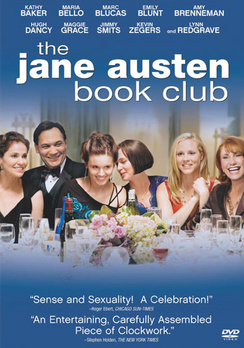 This film is hilariously funny, although not in that laugh-out-loud way, romantic, but not weepily so, cute and quirky and a lovely modern Austen fanatics favourite.  I adored this flick, although it isn’t an exact replica of P&P (nor any of the other Austen novels) and it falters in several places by not sticking to a strong storyline.  Despite it’s overt failures, it overcomes them by giving the same buzz as sitting down with a nice regency classic does.

It begins with this wonderful montage about, basically, the shit-house parts of modern living.  The best bit is when the woman is trying to reach the ticket in the machine but her car is too far away.  It is a wonderful, amusing look at what we all go through all the time.  Unfortunately it then begins with a ridiculous scene of a dogs funeral.  Even as a dog lover this just seemed too farfetched, however it does introduce most of the characters nicely and brings up the main issues we will see shaping some of the story later on- relationship troubles, sexual orientation, crap marriages etc.

“All Jane Austen, all the time, it’s the perfect antidote… to life.” This basically sums up the film.  It is flawed, but the characters drive us through it with their passion for Austen, and their friendship for each other.  It isn’t like watching a hollywood blockbuster, it’s like being involved with their lives.  They are people you wish you could have coffee with, and sit discussing miserable moments of the day, lack of relationships and the lack of desirable partners.  There’s this nice balance of bitchiness, quirkiness, laughter, motherly characters and a bit of sexual tension thrown in that makes the film almost sing.

From watching this with people, I know that you don’t need to have read all the novels (or any in some peoples’ cases) to appreciate this film.  But I think you need to know them to understand the complexities of their lives and the fantastic nuances and discussions that the director has woven in.

However, back to the ‘Pride and prejudice’ side of things.  Each character in this film presents one of the books to the group and each of those has an experience somewhat like that in the respective novel (Emma is probably the most obvious parallel with the character of Jocelyn).  It’s fantastic to see people living these lives of women so long ago.  It’s nice to see characters that embody Emma, Lizzy and Fanny to some degree, and it’s fantastic to see them argue about them and actually get passionate about these centuries old women.  I’ve seen people who have watched this film battle it out, on forums and in conversations, about the new characters presented in this film, which is a great thing to see.

The discussions the characters have about P&P is, I guess, enlightening.  It isn’t scholarly, but it is womanly and full of feeling, and shows how different perspectives of life can colour the reception of a novel.  There is this assertion by Prudie (Emily Blunt) that Lizzy would be the ‘homecoming queen’, she is the popular girl of the novels.  The others set about defending the less-popular Fanny, but none of them jump to argue the original point.  It’s an interesting one.  Lizzy is popular now, that much is true, but within the novel itself- Jane is the beautiful one with the nice temperament, Lizzy is second place.  She may be her father’s favourite, but she most certainly is not her mother’s, and she is not at all liked by Caroline Bingley etc.  Her “conceited independence” is disliked by the upper echeleons of society, and even Mr. Darcy points out her failings.  So perhaps she is our pin-up girl of today, but she was no election-winner in her own fictional world.  I wonder what the people of the time thought, and how she compared (in their minds) to the characters of the other novels.  If anyone has read anything about this then let me know, I would be very interested!

Bernadette, who controls the Pride and Prejudice month (May), is supposedly the embodiment of Mrs. Gardiner.  I can’t quite see this, although there are a couple of similarities.  I guess she does try to keep the group together and working, as Mrs. Gardiner helps the family, and she is a voice of logic sometimes.  Her creation of this book club for Sylvia and Prudie (the broken-hearted) is also quite like the invitation for Jane Bennet to go to London.  She is also the confidante of Jocelyn in this piece (and notices her feelings for Grigg) and within P&P Mrs. Gardiner is perceptive and is part of Lizzy’s regular correspondence.

I’ve read that there are supposedly similar plot devices (used more frequently in the book) such as the emails between Grigg and his sisters acting as the letters do within the novels, and this same sense of social commentary throughout which is prevalent in both Austen’s work and this movie at points.  There were also some nice references to similarities made by the characters such as Bernadette: “It’s like a small English village” when referring to the “small world” syndrome as she happens to know Grigg’s sisters.  There is this unnerving similarity between social engagements in Austen to these book-club affairs where they all sit around discussing (often gossiping).

I found it interesting that Sylvia’s response was that pride and prejudice shows that courtship is easy (and subsequently wonders where Austen’s novel is on divorce).  Easy?  Really?  Grigg echoes my sentiments over this.  But then, as Sylvia says, it really does depend on the person.  And by extension their situation and whether they are similar in character or not to yourself.  This does remind me of the difficulties between Darcy and Lizzy- their differences in wealth and family keep them apart.

There’s a nice play on the first line as well from Prudie “Everyone knows a rich man is eventually going to want a new wife”.  I thought this was a nice not-so-subtlety.  I also adored Bernadette’s listing off of how all her marriages are like those in the book.  As well as the description a “Parade of bizarre marriages” from Prudie.  Then there is this fantastic (drunken) outburst from Prudie about how our mothers are inside all of us waiting to get out, and then she speculates over what happens after Lizzy and Darcy’s wedding (which is, of course, a topic that many speculate about and is the topic of many fan-fiction novels).

I can’t really say more than I have.  Just watch it.  Don’t expect too much, but be prepared for a pleasant surprise.  And a massive urge to re-read all the Austens afterwards!  I’m starting tomorrow.

N.B. Upon reflection… Hugh Dancy (our delightfully awkward and clumsy sci-fi fan in this) would make a gorgeous Mr. Darcy.